Invent not similarities for God; for God knows, and you know not.

Now when Jesus came into the district of Caesarea Philippi, he asked his disciples, ‘Who do people say that the Son of Man is?’ And they said, ‘Some say John the Baptist, but others Elijah, and still others Jeremiah or one of the prophets.’ He said to them, ‘But who do you say that I am?’ Simon Peter answered, ‘You are the Messiah, the Son of the living God.’ And Jesus answered him, ‘Blessed are you, Simon son of Jonah! For flesh and blood has not revealed this to you, but God in heaven. And I tell you, you are Peter, and on this rock I will build my church, and the gates of Hades will not prevail against it. I will give you the keys of the kingdom of heaven, and whatever you bind on earth will be bound in heaven, and whatever you loose on earth will be loosed in heaven.’ Then he sternly ordered the disciples not to tell anyone that he was the Messiah.

“Who do people say that the son of man is?” … it is an interesting question Jesus asks the those who were with him in the district of Caesarea Philippi in our reading this morning. “Son of Man?” Jesus used this identification numerous times to refer to himself. It is an interesting title.  In Hebrew, as I understand it, it can simply mean, being of humankind, humanity, son of human.

“Who do people say the Son of Man is?” However, it is obvious in Jesus usage it is something more, deeper, it carries with it a weightier connotation. There is something of the Divine wrapped up in this use of the title, “Son of Man.” It is linked to the second question he asks. However, the first time, as they are gathered here in Caesarea Philippi, “Who do people say that the Son of Man is?”, “And they say, some say John the Baptist, but others Elijah, and still others Jeremiah or one of the prophets.”

I have long found the disciples response to his question interesting. Why would they suggest such things? Perhaps they, like Peter, as far as we know Peter may have thrown out one of these names, the text does not individually identify who the “they” is in the story. It is interesting because it might lead one to ponder the idea there was some sense of reincarnation in the disciple’s belief system. We are confident they were all Jews, as far as we know, and to my knowledge I have never encountered any concept of reincarnation in the Jewish faith. And yet, here they are suggesting the Son of Man, presumably Jesus, is John the Baptist, Elijah, Jeremiah, or one of the prophets… suggesting these without rebuke or commentary from Jesus in the moment. We don’t know what was in the minds of the disciples or the author of this story in Matthew at the time, yet, I think it is worth the ponder and the consideration as we journey through faith…  or to quote one of my favorite authors, Walter Brueggemann, “I have a wondering about this…”

Anyway, Jesus does not correct, admonish, rebuke, or enter into a doctrinal and theological debate or discussion with them… he simply asks them a second question… similar to the first, yet with a subtle difference. ”But who do you say that I am.” There is no evidence to support my vision as I see this whole scene through my mind’s eye, however, I see some of the disciples standing around with their heads down, some perhaps drawing in the dirt with a stick, others gazing up into the nearby trees or just into the blueness of the sky above… silent.  Perhaps they are all thinking what Peter blurts out and just don’t want to say it. Perhaps they think they have already answered this question once and wonder what Jesus is up to with this sudden pop quiz.

“You are the Messiah, the Son of the Living God.” We might presume Peter just blurts this out without thinking much, we don’t know, the author doesn’t tell us. We don’t know if he answered immediately or if there was an extended and uncomfortable silence preceding Peter’s comment. I say comment, because the author does not give us a clue as to how he said it… was it an emphatic, bold, confident, testimonial, and witness… or was it just a calm statement of what Peter considered fact, or… was it more timid, and hesitant? We don’t know. I lift these wonderings up just to give us a clue about how much each of us might read into the text as we study… it makes a difference.

Jesus affirms Peter’s statement, “Blessed are you, Simon son of Jonah! For flesh and blood has not revealed this to you, but God in heaven.” … Notice Jesus still offers no correction or admonition to the disciples who wondered if he was John the Baptist or one of the prophets… only an affirmation of Peter’s statement of belief.

I have a wondering… in the midst of all the sermons and commentaries on this passage I have heard and read… most of them have to do with the followers of Jesus needing to decide for themselves … “Who is this Jesus.” Often times, in some traditions, it is the preamble to a confession, or an altar call, or some other kind of witness… and invitation to state and claim an assent with Peter the Jesus is the Son of God… other doctrinal things get attached as well…
that Jesus is savior, that Jesus died for your sins, that Jesus is the only way, etc.… However, … I don’t see that in here.

Yes, in this passage and teaching, the author tells us Jesus affirms Peter’s statement, Jesus says upon Peter’s statement the church will be built, and hell will not prevail against it… the author tells us Jesus gives the keys to the Kindom to Peter… yet, there is something about the fact that the author gives no corrective to the other disciples. I think the Jesus of the early church recognized the humanity of who surrounded him… the humanity of who we are…the diversity of who we are… and left room for diversity of thought and belief for those who embrace and follow the Way.

And then there is the closing statement. “Then he sternly ordered the disciples not to tell anyone that he was the Messiah.” This is not the first time Jesus has told others not to say anything about who they believe he is or about something amazing he has done. It is a curious thing. I have a wondering… Perhaps it is his attempt at preemptive crowd control… if folks find this out… the crowds will get out of hand? Perhaps he wants to get the disciples trained before he launches them with the Good News? Perhaps he thinks it is not time yet?

There is a good deal of speculation about these directives from Jesus to those who witness things to keep it quiet. My wondering has brought me to the thought of … perhaps the thought these things were a distraction from his message, from his work in showing those around him who God is, a distraction from teaching those around him how to be and do these good works and acts of healing, justice, and compassion themselves… to not put him on a pedestal, but rather look to God, the Divine in whom we live and move and have our being. I think Jesus knew the danger of putting those we look up to on a pedestal, rather than learning to be a compassionate loving presence ourselves in the world around us.

Richard Rohr in his daily meditation from 2014 entitled Jesus as Paradox, suggests something similar when he writes… “I have often said that the job of religion is to make one out of two: the healing of fractured relationships, the forgiveness of everything for being imperfect, marriage itself, the central process of divinization of the human person. Throughout most of our history, we could not, or were not told how to hold the opposites together. In most cases, people either lacked the inner spiritual experience or the intellectual tools, or both. We were largely unable to find the pattern that connected all the mysteries, even though it had been fully given to us in Jesus. We worshipped Jesus instead of following him on his same path. We made Jesus into a mere religion instead of a journey toward union with God and everything else. This shift made us into a religion of “belonging and believing” instead of a religion of transformation.”2

“Who do you say Jesus is?” It is an important question for those of us who claim to follow his Way. And perhaps a second question is like it… “To where is he pointing/taking you and who is he calling you to be. Think on these things and know you do not journey alone. Peace – Amen.

Building a Culture of Generosity: Presence

Building a Culture of Generosity: Prayer

Building a Culture of Generosity: Service

Find us on Vimeo 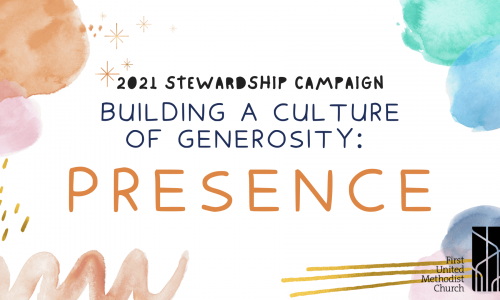 "Building a Culture of Generosity: Presence" 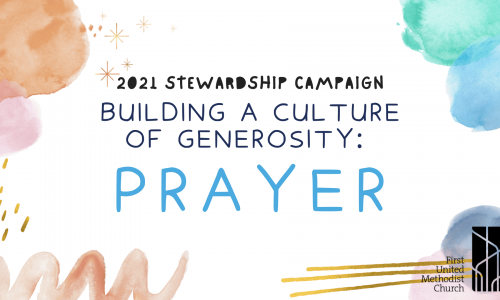 "Building a Culture of Generosity: Prayer" 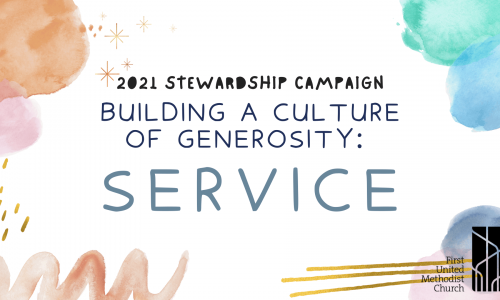 "Building a Culture of Generosity: Service" 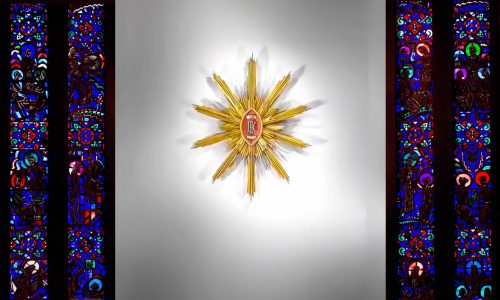 "The Numbers of Work"